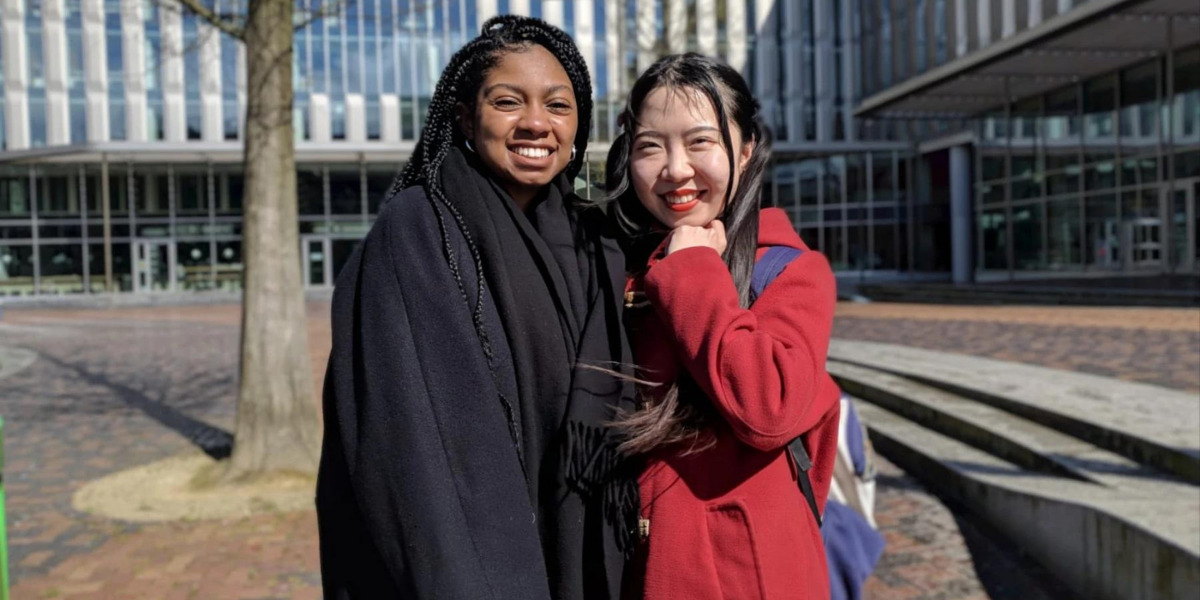 On March 27th at Museumplein, I participated in the Stop Asian Hate demonstration. Watching people bravely sharing their stories, speaking out for a better life. I was inspired and told myself that I would try my best to change this situation and protect them.

At that time, I never thought that I would experience an anti-Asian hate crime and have my life changed.

On Sunday afternoon 4th April, I departed from my friend’s house and walked to Van der Madeweg to take the metro home. As I walked towards the metro entrance I noticed two men standing side by side shouting and gesturing at me. I couldn’t hear the content with my headphones on, but I could tell that their expressions were not friendly. I ignored them and tried to make my way straight to the entrance.

Suddenly, I felt something hit me in the back, and saw the objects they had thrown rolling at my feet. I took off my headphones and looked behind me. Turning to see two men holding more objects, about to throw them at me. Before I could say anything a woman, who later introduced herself as Tessely, began reprimanding the two men. The men denied what they did, but the woman insisted that she saw it clearly. However, the two men were aggressive and kept approaching her. The quarrel was in Dutch, but I clearly heard the words “China”, “Corona”, “Chinese k*nkerh*r” and so on. My heart sank. There was no doubt that this was a hate crime.

As the confrontation escalated the perpetrators even called Tessely “racist” for helping and defending an Asian woman! She valiantly retorted that she is black, so she knows exactly the trauma of discrimination. That she couldn’t let this injustice happen in front of her eyes. That she as a black person, would always stand up for, and support Asians!

Looking at the two violent men threatening the woman who kept protecting me, I had to do something. I walked up, raised my phone and began taking pictures of them. Once they noticed my action, the men hurriedly blocked their faces in panic, but soon became enraged. They rushed over and robbed me of my mobile phone and belongings. The Asian woman who shared her experiences during the demonstration suddenly came to my mind, saying that passers-by had spat in her face, and Asians were insulted as “fuck off corona”.  It was only at this moment, that I fully understood how helpless they felt. We have done nothing wrong, we didn’t ask for this. Yet we are targeted for the colour of our skin; our very existence is considered offensive

Facing these attackers was horrifying, they were tall and imposing and viciously engaged with Tessely. Thinking back on the experiences of my Asian friends who cried about being bullied, and how I felt so distressed that I was not by their side at that time to protect them. I summoned the determination to face the attackers. I thought: How dare you insult Asians in the street with such arrogance? You attack me while i’m by myself, thinking Asians can be easily bullied, right? I would be willing to die here to make you pay for doing so. So that you will never dare to treat another Asian this way ever again, you will regret bullying Asians for the rest of your life. Damn you! As I made my stand I saw the men preparing to assault me, pulling back to punch and kick me. I braced myself and yelled “Stop Asian Hate”, trying my best to defend myself and fight back.

The expected hits and kicks didn’t make contact. Tessely tried her best to stop the two men from assaulting me. Even after being seized by the throat and pushed away, she still desperately protected me from being beaten. Every time I recall this scene, I am moved! How brave and kind can a stranger be? Someone who has never met me before but still chooses to stand up without hesitation and fear when she sees injustice, even if it puts herself in danger. As more people began to intervene, calling the police and protecting me, the perpetrators fled. The adrenaline dissipated, and I suddenly realized that my life had been threatened. My legs felt soft, and I slumped to the ground. My body trembled uncontrollably, and I could help but ask why? Why? Why on earth?

Feeling that someone was helping me wipe my tears, I looked around and saw that there was a crowd of people surrounding me. They looked at me worriedly, and some hugged me to comfort me. A punk girl with dyed hair handed me a magnolia flower she just picked. A woman in work clothes handed me water and tissues. They were black, white, and Asian. They all tried their best to help me. They said that I was safe. They praised me for being very brave and promised they would never let this happen again. I felt a great calm. Yes, that’s why I love living here. Yes there are racists here, but they are not tolerated by most of the righteous and kind people here. We are never alone.

Tessely accompanied me to the Diemen Police Station to file a report. Where the police immediately recognized one of the perpetrators from the photos I had taken earlier.

Thank you for reading my story. If this event can touch people and make them think, influencing people to make a positive change. If it makes people re-examine the status of Asian hatred, and contribute to a safer and more comfortable life for everyone, then my experience was worth it.

In fact, I have never regretted it. The police asked me if this experience would prevent me from calling for an end to Asian Hate out of fear? I said, never, on the contrary, this incident underscores the urgency of speaking out and shows the depths of Asian hatred present in this society. It has made me more determined and I won’t back down. In addition,  I got to know the brave and kind Tessely because of what happened. We have become good friends and she will also be participating in the demonstration on April 10.

Our voices are heard. Our suffering is taken seriously, and I believe that through our joint efforts, we will have a different tomorrow!